What a way to win!

QEHS Racing Team are lapping once again, this time heading North with the shared ambitions of taking home a win.

On Sunday 22 September the day began with all 10 QEHS students setting off in the early hours of the morning towards North Berwick’s racing track: East Fortune.

The actual track was a complex loop of hairpins, curves and corners, straight stretches followed directly by bends, wide lanes and tight corners – the circuit sets itself up to be devilishly hard.

Upon arriving at the venue a whole new racing day begins. With the car to scrutinise, briefing to be given, racers to be suited-and-booted and final checks to be made, the real rush starts. With us keeping our bubbling excitement on hold only for someone to shout  ‘QUICK GRAB THE TAPE I THINK A WIRE’S LOOSE!’.

This hectic whirlwind continues on until the practice loop is called and we send out our first team racer. After this mad beginning everything starts to calm as we slowly begin to learn the track and the track’s tricks. Then both teams can start to relax as we finish off the race admin and start figuring out our average lap times and when to control the speed.

After the first race has finished the lower school team came out in 2nd place whilst the Sixth Form car placed 17th. We noticed a potential issue with the Sixth Form’s motor which we will investigate over the next few weeks. So now we could sit through the most important part of the day: lunch!

And then at a quarter to three the second race began. This race however hit the dramatic side as a kit car was knocked off the tracks onto its side, temporarily stopping the entire race but only for a few minutes. Yet despite this stop the lower school car pulled through and ended with us placing 1st overall in category!

Finally by the end of the day came the awards giving in which we won three trophies, all ready for the prestigious trophy case of QEHS. These awards included the overall highest mileage award, the Greenpower spirit award and placing us overall 3rd out of all the cars competing that day. Overall the competition was a massive success as both teams have now officially qualified for finals in Silverstone in a month.

We would like to thank Chris Baylis, President of Hadrian’s Wall Rotary Club, for providing the cars and ongoing support in our club, Stephen Waddle and Shane Quinn at Arnold Clark Ford Hexham, and Stephen Atkinson at Arnold Clark Birtley for sponsoring a hire van to get us to the event, and the ongoing parental support we are getting! 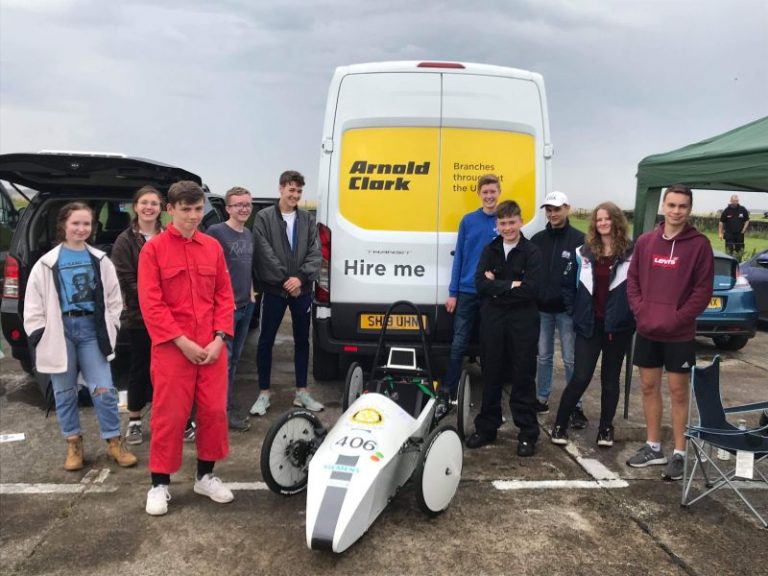